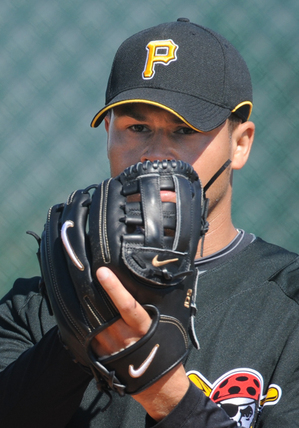 Well, Ian Snell spent no time making his first statement since being sent down to Triple-A Indianapolis. In fact, after walking the first hitter in his start for the Tribe on Sunday, Snell proceeded to strike out the next 13 Toledo batters he faced. In a row.

The Mud Hens finally put a ball in play with one out in the fifth, when Brent Dlugach singled with one out. Snell went on to strike out 17 in seven innings. He threw 108 pitches, 70 for strikes.

“I just worked off my fastball,” Snell said afterward. “The guys made me feel welcome here.  It was just fun to see this relaxed and fun atmosphere.  Nothing against the guys up there, you know they work hard, they do everything.  I just have a lot of thoughts going through my head and I just wanted to get my thoughts together and it felt great.  I felt awesome today and they made me feel awesome.”

Snell’s only disappointment had to have been not getting the win for his stellar effort. One unearned run was charged to Snell, who allowed only two hits, and it wouldn’t be until Garrett Jones connected for a walk-off single in the 10th that Indianapolis sealed the win.

Those who saw Snell in Indy reported that his fastball sat at 94 mph and reached 96 mph at times. His slider was especially effective against right-handed hitters.

Oh, and Snell ended his day with what else but some shaving cream to the face.

“I haven’t felt like that all year,” he said. “It’s just amazing you know.  These guys are great and these guys are a bunch of goofballs and it makes you want to be here and pitch well here. These guys welcomed me with open arms and it’s just felt good to see fresh faces.  And this crowd, I loved pitching here when I was here in 2005 so it was a great feeling for me and I just enjoyed it.”

All in all, it was definitely the start that Snell needed after what has been a tumultuous week and a trying season for the right-hander. No one has ever doubted that he has the talent, now it’s just trying to maintain the mental toughness to finally let it show.

Stay up-to-date on all your Cardinals news at cardinals.com
Have an Inbox question? Send me an email at Jenifer.Langosch@MLB.com
For breaking news, also follow me on Twitter: @LangoschMLB
Listen to a weekly Cardinals.com podcast
Connect with Cardinals.com on Facebook
Read content on your tablet using Flipboard